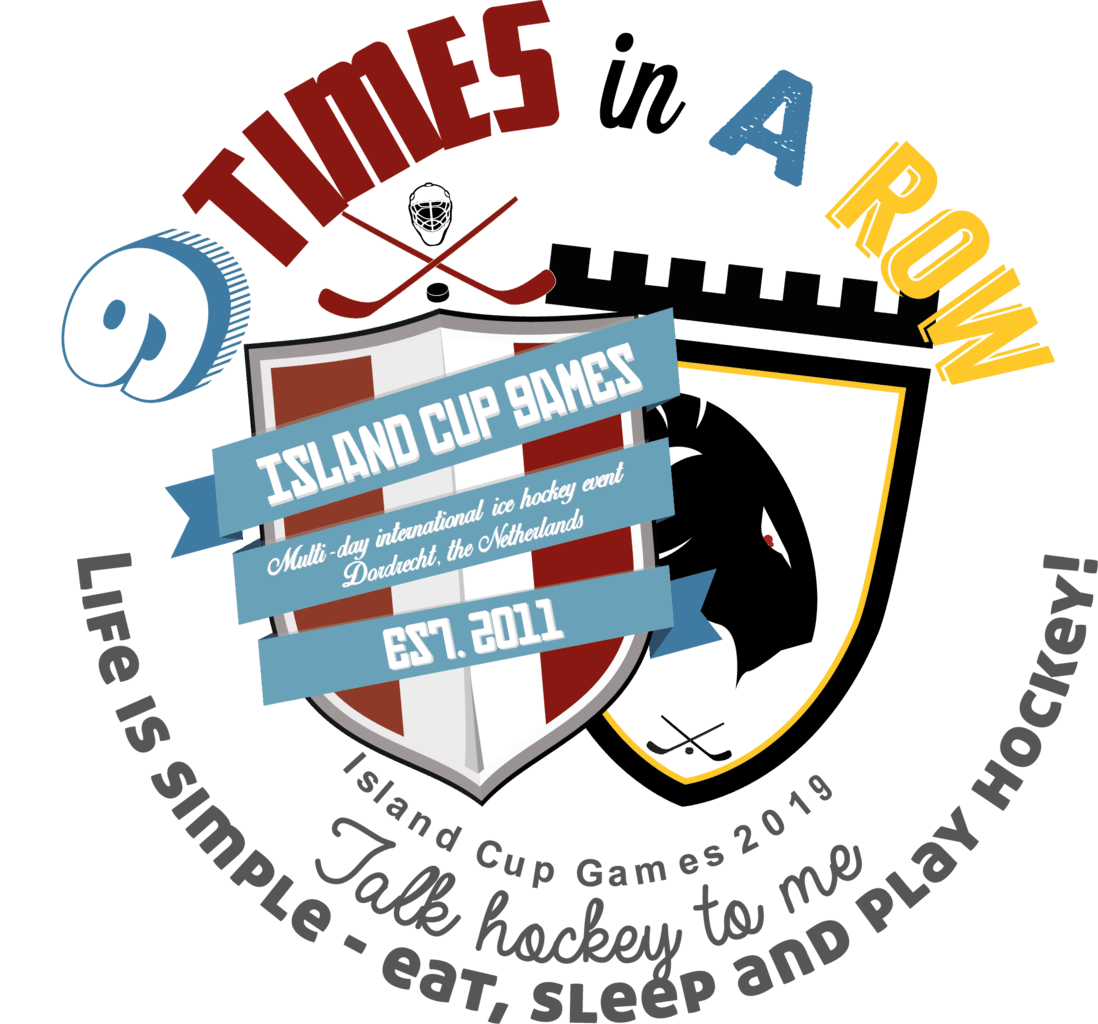 All volunteers are recognized by the Island Cup Games grey hoodie. The organization has done everything in their power to give everyone a unique experience. If there are any questions or concerns, speak to one of the volunteers, they will help you.

On a projection and posters in the rink you will find the floor plan, schedule and game results. There will also be a banner with the static game results. Off course all info will also be in this app and on our regular website www.islandcupgames.nl

Island Cup games has a fair-play character. The organization expects sportsmanship from players, visitors, coaches and others, both on the ice and beyond. Please read the article Ice hockey carefully.

During the tournament there are official helpers in orange vests. In emergencies, they are the first point of contact. They take care to follow the correct procedures as soon as possible to achieve the right solution. When you can’t find them, ask a crew member.

Smoking is not allowed in the Sportsboulevard. If you want to smoke, you can go outside.

No pets are allowed in the Sportboulevard.

The games will be played according to the published schedule and following IIHF recreational rules. This allows slap shots and body contact but no body checks. Any infraction concerning body checking will be penalized. The Icing rule is applied. Face-offs following a penalty that creates a short-handed situation will be taken in the violating teams own zone.

The matches will be played with duration of 2x 20 minutes. Due to the tight schedule the organisation expects the teams to be game-ready on time.
Please beware the game will start on time. If any team is not ready to start playing, they shall receive a warning from the referees to get ready within 30 seconds. When a team fails to comply a 1 minute minor penalty for delaying the game shall be assessed. The time of all penalties start at the next face-off moment.

After every other game, we would kindly like to ask each team to provide a volunteer to move the goals because the ice will be resurfaced after every game.
For competition purpose the game points are as listed below:

In the event of a tied standing after the first and the second game round, the following tie-breakers will be used in this order:

In the unlikely event these tie-breakers do not produce a winner, the final decision
rests with the organizations game officials.
Minor penalties are 1 minute instead of 2. Every 6th minor to the same player in the same game is converted to major and thus game-ejection.
Mayor penalties are an automatic game misconduct. The team of the penalized player will NOT be short-handed following a major.
A second major by the same player will result in ejection from the tournament (even if you are from abroad)! (note: not the combination of 6 minors and a major)
Please count to 10 before doing something stupid. It’s a friendly tournament.

All officials do this out of love for the game. They are here, so you can play! Please treat everybody with the same amount of respect you want others to treat you with. Abuse of officials will be reposted to the organization’s official for review and further disciplinary actions.

Participation is at your own risk.

Your team gets the key to the dressing room against a deposit of 50,- euro. If you hand in your key on Sunday afternoon, you will receive the deposit back. If you lose the key, the deposit will be used to pay for the damage to Optisport (also possible damage to dressing room).

Between the games you can see other games from the stands. These are accessible by stairs and by elevator.

The Ice Bar is exclusively available to the participants and ‘cheerleaders’ in the tournament. In the lunchbox you will receive a drink. Other drinks can be purchased at the bar.

This year you can also get a special deal at the bar:

If you want to go sight seeing in Dordrecht, please make sure you will be back on time for your next game. On Friday and Saturday transportation to the dinner / party locations will be from 19.30 till 21.00 and back from 0.30 till 1.30. If you want to stay longer, that is possible, then you will have to take a taxi back to your hotel, or go by your own car.

Parking in front of the hotel for free, ask the crew for a map.

HAVE A GREAT TOURNAMENT, MEET NEW FRIENDS AND HAVE A LOT OF FUN WITH EACH OTHER ON AND OFF THE ICE!

ICG stands for a fun tournament with a competitive element. A lot of smiles and laughter!

Sportboulevard Dordrecht is a multi sport accommodation. In addition to ice hockey, various other ice sports can of course be practiced as speed skating and figure skating. But also curling as well as sledge hockey. In addition to the ice rink there are various rooms where basketball, volleyball, indoor football, etc. can be played

And to top it off, there is also a swimming pool. This pool has a recreational and sporting part. Besides swimming laps, there is also underwater hockey, rescue swimming, water polo, etc.
A complex where every athlete finds his or her liking.The complex dates back to 2010. Because of the renewed structure and thus appearance it is a special building in its surroundings.
Certainly the shape of the ice rink is special and can best be described as a long stretched UFO.
The sports complex forms a whole with the opposite health park. A large regional hospital with all the associated facilities.

In order to give all visitors to both the hospital and the Sportboulevard a parking space, there is a complex between the two complexes and a spacious parking area. The Sportboulevard was commissioned by the Municipality of Dordrecht. On the location were formerly the old facilities which had no connection with each other.
This has therefore been integrated into the new complex, creating a multi-sports complex where large sports events regularly take place.

A team that registers consists of a maximum of 12 players (as example 11 + 1 goalie). The prize to participate in the tournament is therefore based on this number. Of course it is allowed to come with more players or goalies, however, these are charged separately.
Also accompanying family members and / or fans can participate in the organized dinners and party evenings. If these people are more than the basic number then we charge a soft price for that.
The parties where we have dinner and hold the party evenings must be informed in time about the number of participants. It is for this reason that we would like to receive as much acurate as possible from you beforehand.

*We have a so called early bird discount for teams that register before may 1st 2019! This discount is 250 euro per team.